We lost Debbie Reynolds and Carrie Fisher the wonderful  mother and daughter Hollywood duo within a day of each other. Their private and public funeral services contained some creative life celebration ideas to commemorate their remarkable lives that might inspire you.

Debbie Reynolds and Carrie Fisher, what a mother-daughter force!

Their public service was at Forest Lawn Memorial Park-Hollywood Hills. Two creative ideas stuck out as unique at the public service. First, they seated Debbie Reynold’s dog Dwight, in the front row on a towel. I’m a dog lover and have witnessed dog’s amazing ability to feel emotion and to be supportive. It seems fitting that her beloved dog should have been a part of her service.

Debbie Reynold’s dog Dwight seems to be feeling the emotion at the memorial service of his owner.

Secondly, you would expect great music at two iconic Hollywood legend’s services. Like most great funerals, or more appropriately named celebration of life, music is a key component and this music selection didn’t disappoint. Traditional funeral music wouldn’t have been appropriate here.

The emotional service, began with the Gay Men’s Chorus of Los Angeles rising from their seats in the audience and singing Cyndi Lauper’s “True Colors”.  Behind the choir was a slide show of photo capturing moments with the mother and daughter together as well as individual photo tributes.

Troupes of dancers from the Debbie Reynolds Dance Studio — she founded the North Hollywood venue in 1979 — performed with umbrellas and yellow raincoats to honor the star.

And a new song from James Blunt — who composed his hit “You’re Beautiful” in Fisher’s bathroom — was played for the crowd. If you’re looking for your own musical inspiration visit our top songs for funerals. 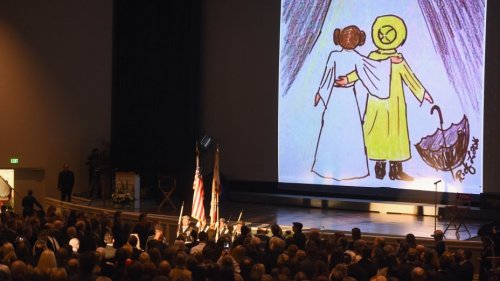 Carrie Fisher’s daughter, Billie Lourd organized  a private service for both her mother and grandmother, Debbie Reynolds, who lived next door to each other in Los Angeles. About 125 people attended the service and Lourd wanted it to feel like one of many of the festive and legendary gatherings at Carrie Fisher’s home. Carrie was known to throw great parties where she would walk around and tell funny stories and generally stir things up. Often she served fried chicken, collard green and corn bread to her guests. Her service was no different. It was held in her living room and fried chicken, collard green and corn bread were served. 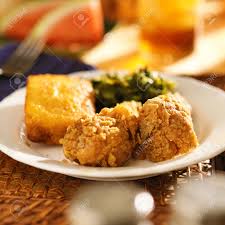